I was a young Czech nurse when the atrocities were happening in the Balkans, and NOBODY from the EU moved a finger, nobody helped them! I often asked myself what would have I done…?

While I had no influence over it, as after the Velvet Revolution in Czechoslovakia, after 40 years of oppression, and 20 years of Soviet occupation, I finally was allowed to travel abroad and I left home.

To this day, I am ashamed to be European for our utter failure in the Balkans! Seeing the almost unrepairable damage that conflict left until today, over 18 years later, is utterly heartbreaking. We all bear responsibility.

For better or worse, the ONLY leader who proved to LEAD was U.S. President Clinton, who due to the long-standing ‘Monroe Doctrine’ did not and could not put “boots on the ground” as Americans love to say, but instigated aerial raids. President Clinton’s role in this conflict is being discussed even today, however, speaking as someone who has deep historical roots to Peoples abandoned and left ‘behind’ by the Western powers in their time of need, without any help… (i.e. The Munich Agreement of 1938, The Prague Spring of 1968 -> followed by foreign invasion of my beloved homeland by 5 foreign armies, led by, you guessed it, the Soviets and their criminal leader Leonid Brezhnev). Trust me when I tell you, you want help, any help! 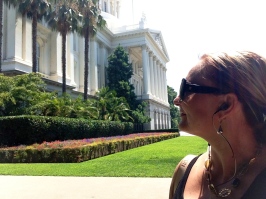 It is only here, in this country, where we have the incredible luxury to discuss and criticize actions of which we quite often know very little. BUT, let me finish, it is a part of our political system, it is a part of democracy and as a democracy “groupie” myself, I fully respect and admire this system very much. In fact, I have been actively involved in the post-communist transition to democracy and democratization of institution in Czech Republic on the local political level for past 20 years, and it is Job’s job. It is only when you are on the ground, demonstrating against the power that is usurping you and denigrating you, waving your flags, being beaten and shot that you are looking towards the skies hoping to see some allies and The Allies!

For my beloved Czechoslovakia in 1968, the year my amazing parents got married and sadly also the year their HOPE and DREAMS were squashed by the Soviet invasion, there were, for very obvious Cold War reasons, no sky allies or any Allies… And we (as in my fellow countrymen, since I was not even ‘an idea’) were looking up and waiting, every day! In the years afterwards, during the deep Normalization process (just a different word for Communistic indoctrination enforced by the Soviets), we were secretly listening to the Radio Free Europe and Voice of America (both I believed financed by the U.S.) in our basements, faced with hard jail time if caught, waiting for hours to hear our country even being mentioned! And this is how people of Ukraine feel today.

We are amalgamate of our previous experiences, and I really do “FEEL” the past plight, hurts and betrayals of my people and my country. Well, visiting every concentration camp around during yearly school ‘day trips’ since 2nd grade left DEEP scars and nightmares in my soul. At the same time, it also cemented such un-moveable human resolve, built foundation for my ‘Fight-or-Flight‘ (political & systemic) response, and cemented my strong sense of protection, responsibility for others, and especially for those weaker and unable to look after themselves => any more questions why I am a nurse, political operator and a humanitarian? Nope, did not think so.

We have a collective responsibility and we have obligations.

Now as a proud (dual Czech and) U.S. citizen and a highly degreed and educated RN and a political operator, at this point my love & passion for politics, strategy and campaign goes away and my nursing and humanitarian responsibility takes over. That is exactly WHY I DO politics, to PREVENT bloodshed! However, once you cross over a certain threshold, it is no longer about my ability “to do” politics but about my ability to “take care of people”. People need help no matter who is shooting at them and my nursing training and practice precludes me from judging my patients, and that I had some I did not like in my 15+years! Period.

I wrote an article last May 2013 year asking  Should the EU Care About Syria? The Balkans, Anybody?

Now, the question is HOW much, WHO should and WHY “they” should be concerned over Ukraine! ‘They’ as in the now portrayed as Evil The West / EU vs. the always evil East / Russia.

I don’t know about you, but I picked my ‘evil’ long time ago (and we are very happy together, thank you very much). I already lived under devil dominant depressing doormat of freedom-non-existent Soviets. I will pick The West in any shape or form, any time … and yes, I will get lots of criticism for it, but I am strong I can take it.
What I will never do, however, is to apologize for my views of Russia. I lived it, I survived it, I got out. Thank god I now have my beautiful blue U.S. passport!

Ukraine today is at the crossroads.

Country is divided, economically bankrupt, feels betrayed and lied to, plus people are in deep mourning. However, on the other hand, once the elation of a certain part of population over ‘their’ victory will wean off and reality of bad economy, current lack of leadership, deposed president MIA and the looming threat of Russia not far away will set in, people of Ukraine will have a lot to deal with. During my research, I found ONE thing they all agree upon (well, mostly) – they want to keep Ukraine united, as in NOT split in the Western and Easter / Russian parts. If I were at the negotiating table, I would hold on to this and would NOT let go…

I do hope those strong and determined people are ready, prepared and aware that much harder task is ahead of them! Sitting across from your political opponents and rival who you hold responsible (and vice-versa) for what just transpired, will truly show how dedicated and serious about DEMOCRACY the people of Ukraine really are.

Knowing how Russian tyrant Putin feels about Ukraine since he considers it to be a part of his Mother Russia and the center of Pravoslav religion, holding them hostage at will over access to natural gas and other resources and aid … and hearing as a freedom loving and globe-trotting Czech the same tyrant Putin saying that he ALSO consider my Czech Republic to be still under his sphere of influence, my heart stopped!

We’ve already been there, it was hell, and nobody wants to go back…

It is my unequivocal belief we all have global roles to play, we all can help and serve wherever we can.

Thus I am able to feel the plight, fear, resolve but also the uncertainty of people of Ukraine today.

Ukraine has difficult times ahead, and nation-buidling, state-craft and democratization of institutions while re-building trust in government and placing transparency into old systems are amongst the MOST difficult and HARDEST of social and political projects. Look at the U.S. how they are struggling with it around the world, and they have been living it for well over 200 years! Now look at the post-communist countries of Eastern Europe having their “freedoms” for about 20 years… Need I say more?