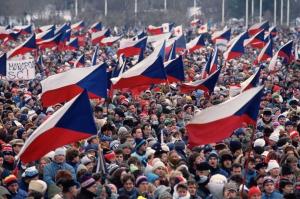 Unless you have been under a rock (or sedated) for the last week, you must have heard that on Nov 10th, 2014 it was 25 years since the fall of the Berlin Wall. What you may not know, however, is the fact there is another 25 years anniversary coming up! Yes, it is the anniversary of the Velvet Revolution in then-Czechoslovak Socialistic Republic (CSSR) on Nov 17th, 2014.

What is most fascinating, and also troubling to me, is the fact that there are celebrations and commemoration events scheduled and planned all throughout the week of Nov 17 through Nov 22, 2014 in Washington D.C. These events include a future of democracy panel discussion, Czech Philharmonic Orchestra performance, Gala at the Czech Embassy in Washington D.C. (no, sadly don’t have an invite), to a Panel Discussion on Vaclav Havel’s Legacy Today (yes, I scored an invitation by simply begging the organizers. Thank you very much!) to the Dedication & Unveiling of the Vaclav Havel’s Bust in U.S. Congress (I will be begging the organizers once I arrive in D.C.) all the way to something most extraordinary!

On November 17th, students, faculty and Alumni of the world-class respected and coveted Georgetown University will be re-enacting – yes, you read right – re-enacting the events of Nov 17th, 1989 in Prague where the brave university students took to streets of Prague and demanded more freedom! Czech students were peaceful, did not make any troubles, except of course for gathering and speaking publicly which was unlawful and criminal in then-Czechoslovakia. To punish the students and make them dispersed, the Communist regime, under the tutelage of president Gustav Husak and Prime Minister Milos Jakes (none were ever held accountable), sent units of Police (Verejna Bezpecnost) in heavy riot gear, with sticks (“pendrek” in Czech), tear gas and water cannons to “take them down”.

The rest is, as they say, history… 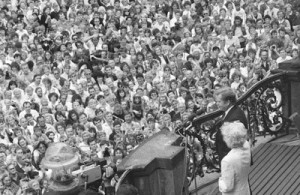 So let’s recap: Georgetown’s students, faculty and Alumni, while celebrating International Students Day, will be re-enacting events of Nov 17, 1989 and of coming days, including reading passages of speeches and proclamations made by then-student government and their leader Simon Panek (current Director of Czech global humanitarian organization ‘People in Need‘ and in Washington D.C. for the events) and by the leader of Obcanske Forum [Civic Forum] Vaclav Havel, the last president of Czechoslovakia and the first democratic president of Czech Republic. Why is this so extraordinary and remarkable?

Because there are NO such commemoration events planned in Czech Republic! That’s why.

Plain and simple. Sad, isn’t it…? I contacted a number of friends in Czech Republic asking them about celebrations. Nothing…

Sadly, this only further ensues my original worry that while D.C. will have Velvet Revolution the American Style, there are no such celebrations or massive commemorating events in Czech Republic.  But there should be!

How easily we forget that Velvet Revolution brought down 40 years of communism, and after 21 looooong years marched the Soviet tanks back to Mother Russia, tanks that invaded & occupied our sovereignty since the Prague Spring in 1968. Velvet Revolution brought us freedom, liberty, opportunity, multi-party political system, free democratic elections, and it also opened our doors to Western culture. It brought us choices and responsibility, and maybe that is the problem? 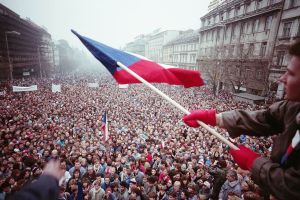 The only questions comes to mind: What happened in 25 years to Czech society that we do not celebrate, ney, that we don’t even turn around in our beds to commemorate such a historic and historical occasion?

What happened to Czech people, politics and culture that we no longer appreciate the freedom to study abroad, for example, or the freedom to travel to Egypt or Italy, decide an election, shop whatever and wherever we want, learn foreign languages, etc…  What happened is certainly THE question.

Well, what happen is LIFE, life happened. And with life came the loss of fluffy future based on political slogans seen through rose glasses.

There is no longer “them” (as in the communist) to be blamed for the status of our lives, politics or the status of our culture. Now, it is “us” and that is starring at us in the mirror every day. What will we do with “us” ? Will we turn “us” back into “them” -> as in allow the Communist who inflicted so much devastation and pain onto my country back into full slay of power and openly into government? It is all up to “us“!

Yes, people are disillusioned, tired, fed up, hurt. They are learning the hard way that democracy is hard and “freedom ain’t for free” as they say. People feel betrayed and used, as if there is no justice. And perhaps there isn’t, not right now anyway.

So what are we going to do about it? Do we have it in ourselves to stand up again, demand changes, demand accountability, demand AND accept responsibility and finally demand some respect? Can we do it? 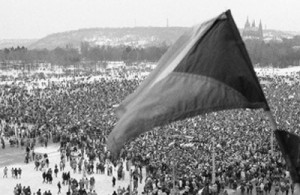 We better remember that during the 1948’s national election, it was the Communists who were elected during the last democratic elections for next 42 years, because they promised pink fluffy future of political slogans seen though rose glasses.